Week 1 went very well despite a very, very frustrating non TD to Jordan Matthews in which Chip was in too much of a rush to challenge. I was on-hand and we needed to stop and take a breath a time or two. A Bloody Mary and an Uncle Herschel's breakfast at Crack Barrel couldn't take away the pain Tuesday morning.

Congrats and condolences to duster10 who helped conceive and hone FVD from the beginning and had a solid win of 30K (see below) which feels like a huge loss at FVD. He needed next to nothing from AP on Monday Night or that Matthews TD for 100K. The Matthews drop cost him 20K as he missed out on second place by less than a point. Also, congrats to tbuelow who went 16-0 in 50/50s despite the fact that Greg Olson punted on every ticket. 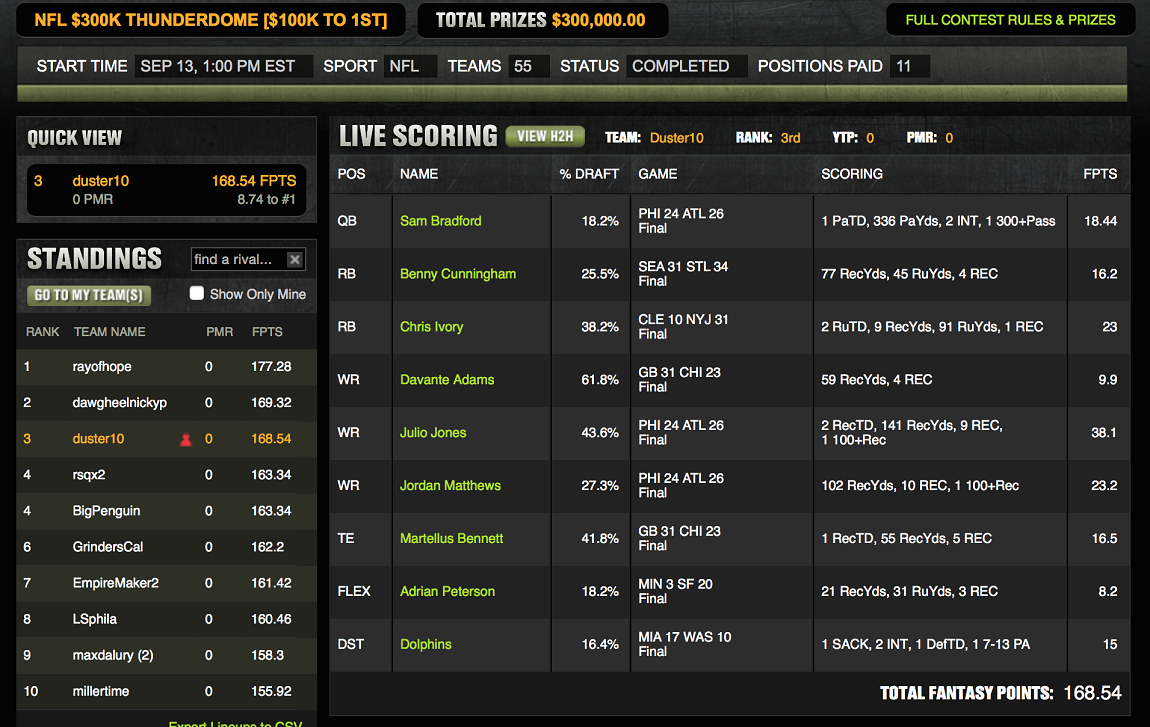 FVD did great at RB and Kicker with Bradford and Matthews as the top QB and WR. Martellus Bennett was 2 overall on Thursday but plummeted in the Sunday rankings. The biggest disappointments by far was Justin Forsett and Tannenhill. I look for Forsett and Beckham to bounce back this week.

Just pulled a scrape, the rankings are set Monday morning so it's no surprise that some MNF heavies are back including Matthews and Bradford. Garcon becomes only our 6th player ever to be undervalued by 2K. Josh Brown and Zach Hocker are inexplicably the bottom rung of the kicker ladder. Julio Jones and Odell Beckham, though not technically undervalued are still commanding a reasonable price at $8800 and $8700 to Antonio Brown's $9200. I see a lot of permutations with those guys for me with the Denver DE.

I added some url variables to better help demonstrate how to use the tool to round out a lineup. Here are some links to view only those undervalued at each position by $200 or more dollars. (You must give your email to view these links.)
Quarterbacks
Wide Receivers
Running Backs
Tight Ends
Kickers
Defense

Where the tool is very helpful is when you are picking that last player. Below is a great example of the power of the dashboard. I had $6700 left and needed a wide receiver on a ticket. I pulled up WRs and sorted by FanDuel Salary. Steve Smith was the play. But a few rungs up was Jarvis Landry at $6900 who was undervalued by $900 therefore was worth $7800. (I already had J Matthews in the lineup.) I grabbed him and downgraded my kicker. It helps shape your lineup to maximize theoretical value. The results are somewhat irrelevant just like in poker. We got our money in good and that's all that matters.

An updated scrape will be available just prior to game time tomorrow, I'll send out a notification.